Last weekend two of us from the BankTrack team participated at Ende Gelände, a mass civil disobedience action in Germany’s Rhineland at the RWE-owned Garzweiler open cast lignite mine, and joined with activists from across Europe and beyond. We set out to promote our Paris Pledge campaign aimed at getting the world’s banks to end their financing of the coal industry, and learned a whole lot more in the process.

Ende Gelände (here and no further) turned out to be one of the single greatest civil disobedience actions in recent history with 1500 activists, aged between 17 and 83, entering the open cast mine and closing down its operations. For many of them, this was the first direct action they had ever taken part in, principally out of the belief that we can no longer wait for state and corporate actors to keep fossil fuels in the ground and thus prevent runaway climate change and further environmental devastation. 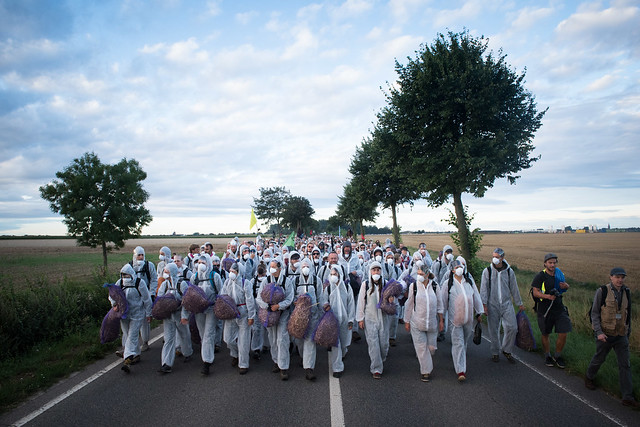 The German lignite mining area in question ranks as the biggest polluter in Europe. It stretches over a surface of 48km2 and, to get a sense of perspective, the mine covers nearly half of central Paris. When the already mined area is included, the total area exceeds the size of the French capital. Within the lignite-rich region of North-Rhine Westphalia, the German energy giant RWE is responsible for the release of 90-100 million tonnes of CO2 every year. The lifespan of the Garzweiler facility extends to 2045, a 30 year period during which RWE expects to extract 1.3 billion tonnes of lignite, the dirtiest type of coal.

The day was emotionally-laden. We travelled to the site out of a firm personal conviction in support of the activists taking part in the action, and as representatives of the Paris Pledge campaign.

On our arrival at the mine site, we were faced with a gargantuan gaping wound that seemed to be endless, its vertiginous depth reminding us how small we are. The same way one can stand in awe when confronted with the might of nature, only this time clouded with a sense of shame and injustice. Looking down inside the mine, the vast dimensions seemed unreal – even the water cannons and police trucks assembled to quell the activists looked like Lego figurines. The overcast skies, the many police cars and the circling helicopters above us only added tension to the scene.

The strange feeling of being in the country that declared the Energiewende (‘Energy Transition’), and yet that had this immense hole in the midst of its landscape, was enhanced by the harsh contrasting combination of wind turbines and coal-fired power plants standing side by side. It was ironic too to see the German police arresting activists on trespassing charges when the project itself has been responsible for destroying villages and ecosystems.

A further, less visible paradox lies in the sponsoring and financing of RWE’s massive coal extraction activities – many of the same banks in which we deposit our money are helping to ensure that RWE continues its coal extraction plans. And BankTrack´s research over the years has pinpointed the main big banks financing such coal mines and installations.

Between 2005 and 2013 RWE has received financing from 22 separate banks. Taking the corporate loans alone that have been provided to the company by private banks, Unicredit Group and Commerzbank are out in front, having each provided €643.2 million. Just behind are BNP Paribas (€613.1 million), Barclays, Credit Suisse and Société Générale (each €586.4 million) and Crédit Agricole (€568.2 million).

And the financing provided by the remaining 15 banks is far from negligible: apart from also providing corporate loans to RWE, the other banks have also helped with advisory services, underwriting and issuing shares and bonds, and providing term loans and rolling credits, all running to hundreds of millions of euros in support of RWE’s dirty business.

Now, however, all of these 22 banks have each received an invitation to do the Paris Pledge, a public commitment requiring them to come up with a phase-out plan for their coal financing within six months following the United Nations sponsored climate summit which commences this November in Paris. Keep an eye out, as an announcement on the first Pledge signatories will surface soon.

Attending Ende Gelände only reinforced our belief that it is essential for the banks to end their support to the coal industry. This is what the ‘Paris Pledge’ campaign is calling for: banks to publicly commit to a concrete phase-out of their coal financing. Last Saturday showed Peter Terium (the CEO of RWE), the German state and the banks financing RWE that we, global citizens, will not sit idly by watching our collective future decay while our politicians negotiate over the least they will have to do in order to reduce the pumping of more carbon into the atmosphere.

The chant is now “Power to the People”, and if the banks wish to be on the right side of history, as a supporter of the Paris Pledge has already so succinctly put it on the campaign website, they would be wise to act now.

You can support our call to the banks and insist on a much better deal for public health, the environment and the climate by asking them to end their financial support for coal. Let your voice be heard at dotheparispledge.org.

BankTrack is the global network of civil society organizations targeting the operations and investments of large, international operating commercial banks.